If you served in any branch of the U.S. Armed Forces between 2002 and 2016 and you suffer from any degree of hearing loss or tinnitus, then you may be entitled to significant compensation, so…

Events have recently come to light that reveals that our military forces and the men and women who have proudly served their country at the risk of their own lives and personal safety have been the victims of a multi-year, multimillion-dollar fraud perpetrated by one of the most well-known and prolific of all civilian suppliers of military equipment – the 3M Corporation and its affiliates.

Documents obtained and produced to the federal government reveal that for some 15 years, 3M and its predecessors and affiliates knowingly sold the United States military forces defective and non-functional earplugs for use by U.S. military personnel in combat situations.

From approximately 2003 through 2015, 3M sold to the US military tens of thousands of dual-ended Combat Arms Earplugs, version 2 (known as “Combat Arms Earplugs”) which 3M falsely represented as meeting the military’s specifications for the protection of the hearing of service men and women in combat and combat-related training scenarios.

Throughout the multiple years that 3M made huge profits selling and supplying these earplugs to the military, 3M knew from its own testing and independent labs that the Combat Arms Earplugs were defective and that using them offered little or no protection from the extremely dangerous and disabling noises that the Combat Arms Earplugs were supposed to protect against.   Just within the past year, the nature and far-reaching extent of 3M’s fraud were revealed when 3M agreed to pay the U.S. Government over $9 million to settle a False Claims Act based on the company’s sales of these defective Combat Arms Earplugs to the military.

The fraud perpetrated by 3M on the U.S. military has resulted in permanent, life-changing injuries to tens of thousands of brave warriors who have selflessly risked and sacrificed so much for our country and for our freedom.

While 3M has paid $9 million in damages to the U.S. government, it has yet to remedy the permanent harm and damage it caused to the thousands upon thousands of individual service members who suffered permanent hearing damage because they were issued and used these defective Earplugs.

Even now that 3M’s fraud has been revealed, 3M continues to choose profits over soldiers and has not even demonstrated concern enough to recall the defective Combat Arms Earplugs.  Instead, 3M has opted to simply discontinue selling the earplugs, which is undoubtedly cheaper than the cost of a recall, but which in many cases has led to even further injury and hearing damage by U.S. military members who have unknowingly continued to use the 3M earplugs believing they were safe.

Now, however, each and every member of the United States military who served between 2002 and 2016 and who may have been issued the 3M Combat Arms Earplugs has the opportunity to receive individual damages from 3M and its affiliate companies for their hearing loss and impairment suffered as the result of their military service.

If you think you were issued the dual-sided Combat Arms Earplugs™(CAEv2) during your term of service or in foreign conflicts between 2002 and 2016 and were diagnosed with or suffer from tinnitus or hearing loss, you may be entitled to Significant Compensation. 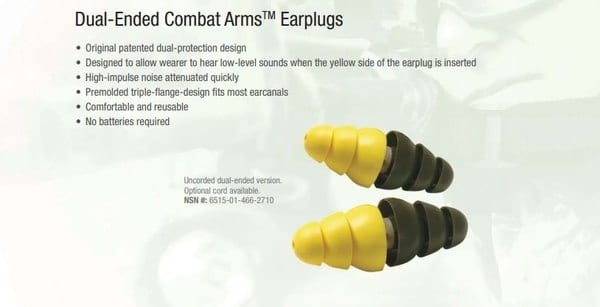 NOTE: UNLIKE MANY LAW FIRMS YOU MAY SEE ADVERTISING FOR THESE CASES, WE HANDLE AND FILE ALL CASES OURSELVES OUT OF OUR OWN OFFICES AND, IN MOST CASES, WE ANTICIPATE FILING SUIT ON YOUR BEHALF WITHIN APPROXIMATELY TEN (10) WORKING DAYS AFTER RECEIVING YOUR INFORMATION AND A SIGNED AGREEMENT FOR REPRESENTATION.   YOUR CASE WILL NEVER BE REFERRED OR SENT OUT TO ANOTHER LAW FIRM AND YOU WILL ALWAYS BE ABLE TO CONTACT, MEET AND SPEAK WITH THE ATTORNEYS WHO WILL BE HANDLING YOUR CASE.

THERE IS NO CHARGE FOR OUR REVIEW, EVALUATION, MEETINGS WITH YOU OR OUR FILING SUIT ON YOUR BEHALF AND YOU WILL NEVER BE CHARGED A FEE OR COSTS UNLESS WE RECOVER DAMAGES ON YOUR BEHALF.

THANK YOU SO MUCH FOR YOUR SERVICE!!!

FOR A FREE, NO-OBLIGATION CASE REVIEW:

Fill out the form below and we'll be in touch within 24 hours!